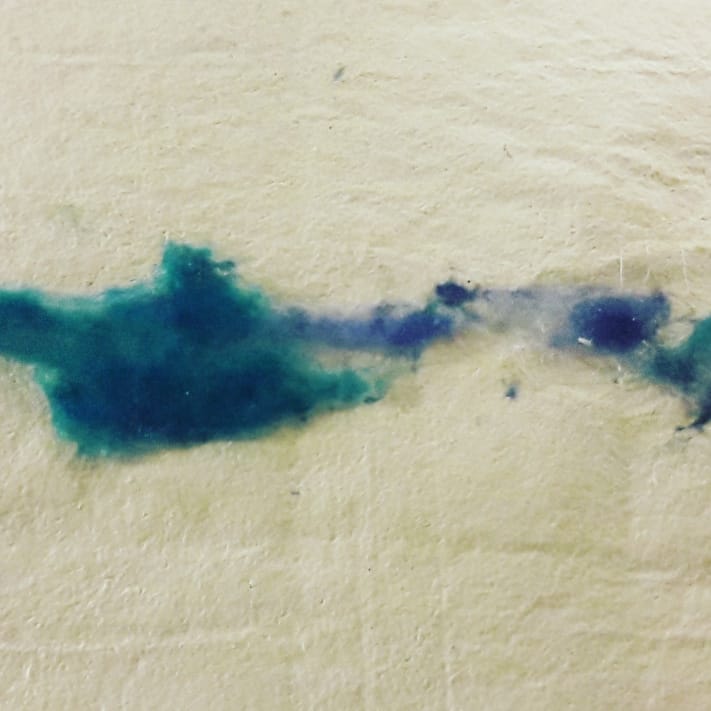 Contemporary Art, from the twentieth century to today, is essentially the abstract universe (that is, abandonment of representation) or the breaking of the canvas (up to the transition to physical reality and the environment).

In the case of Barbara Matera, an italo-American artist who was trained at the Academy of Fine Arts in Bologna, Art is made up of highly material abstract fragments, in an evocative yin and yang in which spirit and matter, idea and physical object duel in a battle that is harmonious even if dynamic.

There is, in her works, a chromatic tension supported by the thick consistency of the surface, a tension however devoid of danger: we are on a tightrope between the quiet Zen and the movement of natural forces, between blue, cobalt blue and gray ultramarines that have a dimension of a dreamlike and emotional space, that is  noetic and logical at the same time.

The artistic research moves and focuses on the materials that embody the idea, panoramas of the mind or the soul, depending on how you want to read them . In a word, it is an art free to ‘wander’, but it does so by speaking a clear, linear, even concrete language. 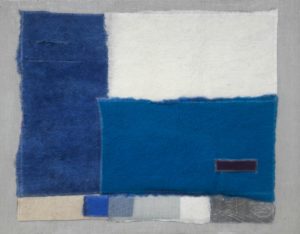 We are in front of works that refer to a canvas of Abstract Expressionism, of Rothko in the first place, with  primary energies, a subjectivity of the author, a painting of “depth” come to light, as in those painters. Even with unequivocal references to that New York School, it is a new art, a new way of creating artworks.

As in that school, you stay on the canvas but you tend to go beyond the margins, you do not come out of the paper, through a performance, for example, but ‘perform’ on the paper, you let the space tends to cross, that the color drips, that the knots of the material – felt intertwine autonomously as threads of scattered, but controlled thoughts.

They are works like fields of circulating energies, like something ‘happened’ captured in the moment of their epiphany, in a hunger of trespassing sometimes evident, sometimes held (in long and narrow geometric lines), in a painting that crystallizes on the support as a pearl from the Bergsonian time series, fragments of a ‘continuum’ that is not broken, but caught in part.

The intricate filaments of felt, the entanglement of soft materials unite the strength of the emergence of primary deep energies (Freud’s Es, tout court) to the substantial subsistence of real matter that claims a primary place, as pulsating as the etheric energies of mind and emotions.

Emotional impulses mean this, literally: moving out, becoming incarnated on the surface and bringing the artist and the spectator to the surface.

Graduated also in Sociology, the relationship between men and between man and the environment is the thematic focus of the artistic research of Barbara Matera: even when she remains on the canvas, without creating installations or performances or video art that she has often dealt with, the connection with the space out there, with the real world, with the environment that we live is around the corner, beyond the visual field and beyond the bidimensionality of the canvas.

For the artist, Art can and must cause awareness, change and put people and things in relation.

Matter, as in Arte Povera, is the first step to speak to the heart of man and to evoke, bring to the surface, cause ‘belonging’. The support is handmade paper with carded wool or linen and the felt with lacustrine, marine and sidereal colors leans on the surface bringing to light Rothkian memories, but also the ‘here and now’ of a daily aesthetic made of rags, ropes, sacks or, just simply, felt.

We are looking for an Art that goes to the origin of Life, of the energies that govern it and of the deep ego that determines emotions and actions behind the scenes.

For this reason it is an Art that enters under the skin, which is touched, that has thickness but also that ‘touches us’, opening the mind to infinite connections with the ‘Oltre’, made of sea depths, lake sludge, skies, in a word of Infinity. Nature and the memories and relationships that man has with her, in all its facets, are the vanishing point to which these works tend, with an intense vibration of energy in every knot, in every tangle, in every curve or straight ahead of our gaze.