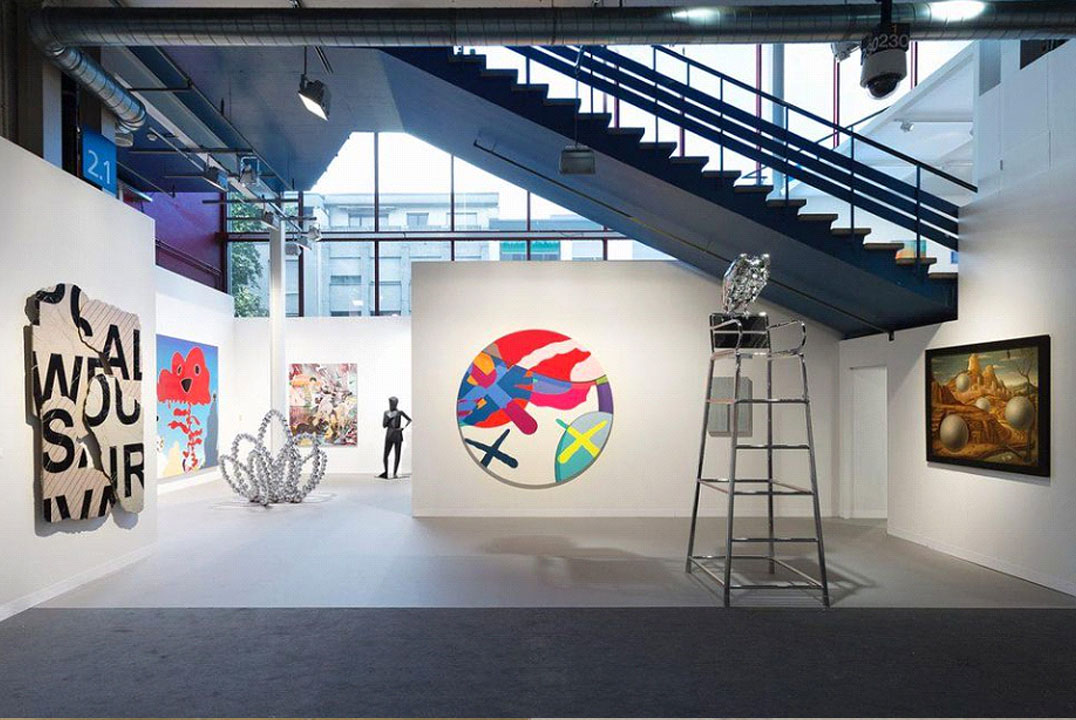 The 2018 edition of the Basel fair has just been closed; art,  style, market blended together with the highest levels of turnout, attention and tendency.

– Lee-Perrotin: the exhibition of the French Bernard Frize in the twinning space Simon Lee + Galerie Perrotin; an adjoining and suggestive space placed on two different floors has hosted the airy and abstract colors of the evocative painter

– History of the art at its climax: tribute to Robert Indiana (and its iconic Love Pop) and double tribute to Sebastian Matta and Marcel Duchamp for the Swiss gallery Gmurszynska, also based in New York,

– 20th century in the foreground: a tribute to the development of trends that marked the twentieth century (Mirò, Picasso, Calder among others) wanted by the London gallery Helly Nahmad

– Picasso superstar: in conjunction with the blockbuster show  at the Tate Modern dedicated to the iconic artist, Basel also celebrates Picasso and his women with the Fondation Beyeler: a bronze of lover Dora Maar, three masterpieces and other faceted faces of the Thirties, that literally saw his triumph with legendary female paintings;

– Ruinart and Liu Bolin: the Chinese artist, known as The Invisible Man, was the partner artist of the champagne house for the Basel 2018 edition

– NetJets and street art: after 17 years of partnership between NetJets and Art Basel, the airline collaborates with Oli-B, street artist, painter and illustrator of Brussels; at the NetJets vip lounge of Art Basel collectors lounge, Oli-B has positioned an innovative installation on various surfaces (canvas, paper, wood and wall) with multiple techniques, including sprays, acrylic paints and digital printing techniques

Some comments on the market:

– The buyers came from a hundred different countries and four hundred museums and nearly a hundred thousand visitors in terms of public; 239 were the galleries and 4000 artists present

– The sales went well, despite having been flocking for two weeks at New York auctions; Michael Findley, director of the famous NYC Aquavella gallery, told ArtEconomy24 that “Buyers compare prices and want to negotiate, they are informed, they are not interested in arriving first, but in buying works to be preserved over time“.

– Among the historicized artists, the sales records belong to the American Joan Mitchell (Levy Gorvy of New York sold a 1959 Untitled – oil on canvas – for 14 million dollars, Hauser & Wirth a canvas of 1959 for the same amount; Zwirner, a piece from 1959 to 7.5 million dollars ).In view of two important institutional exhibitions in the US in 2019, Mitchell’s prices are destined to rise. Also Louise Bourgeois from Hauser & Wirth was one of the artists who reached a higher value: The Three Graces of 1947 reached 4.75 million dollars; Andy Warhol from Pace with a portrait of the Garland was sold at a price not unveiled.

– Brilliant and ‘social’ young artists in the contemporary section: from Esther Schipper in Berlin there was a great work by Anri Sala created together with refugee children, each of whom the artist asked to bite an apple and observe the traces of the bite. A reflection on one’s own identity, but also on the process of registering refugees. The photographs of the fruits, retouched by brush, were hung at different heights to reproduce the notes on the score of the German national anthem (the price is not prevented).

– It was also noted a magnificent Kounellis: with a “untitled” of 1966, a large black rose (selling price 5.5 million dollars). Provenance unknown. (*)

Art Basel is not a fair, it is a symbol – a central event in the art system, so iconic that it even dominates its own content. It is brand, fashion, system, culture and, of course, business.